The original research hut consisted of two spaces. One room was enclosed with a floor, some free standing bunk beds and a bench on one wall. The other room was actually just a storage garage space which was unlined and without floor. Access was via a garage door into that space and then a step up into the bunkroom. It proved quite a mission to move the hut.

All moveable stuff was stripped from it. A floating pontoon out of 2x 14 foot dinghies. They were spaced about 4/5 metres apart and timber lashed across them to form a deck.  The dinghies were beached really early in the morning at high tide and as the tide receded they somehow  managed to carry/slide/manoeuvre the hut out and position it on the pontoon. There was a lot of repositioning as the tide came back in to get the balance right as the dinghies started to refloat!! This was then hooked up a 12 foot Starcraft with its mighty 15hp Johnson outboard and proceeded to tow the whole shebang out into the Arm.

Unfortunately during the day a light wind had sprung up coming out of the Heron River. That combined with by then an outgoing tide meant they didn’t have the horsepower to motor up into the North Arm. They were slowly losing ground and getting drawn further out into the main Bay. By then they couldn’t even get back into Flounder Bay as they had passed its entrance.

How the lot didn’t end up on the bottom somewhere out in the middle of Port Adventure is a wonder. There was a slight lull in the wind and they were able to finally make sufficient headway to reach the shore near the southern end of the beach. That enabled everyone to get into the water and manhandle it along that rocky section of coast to the beach.

The hut was positioned near where the old bivvy had been sited and both rooms closed in and floored.   The original hut was very lightly built enabling it to be physically lifted it up and manhandled it across in one piece. The recessed entranceway was created instead of a veranda because of cost and too many sandflies. The door was the one that previously gave access from the garage.

The management of this hut was taken over by the Trust in 2001.  Since that time it has been reclad, reroofed, new aluminium windows fitted and a fibreglass toilet installed. The hut is a little larger than the standard Hunter Hut and has six bunks with room to sleep more.  Bosom hut is in a sheltered bay but care is required in rough weather. A grassed area alongside the hut has room for tents.

Access.   Either charter from direct from Bluff or ferry and charter from Halfmoon Bay. There is a mooring to secure boats on. 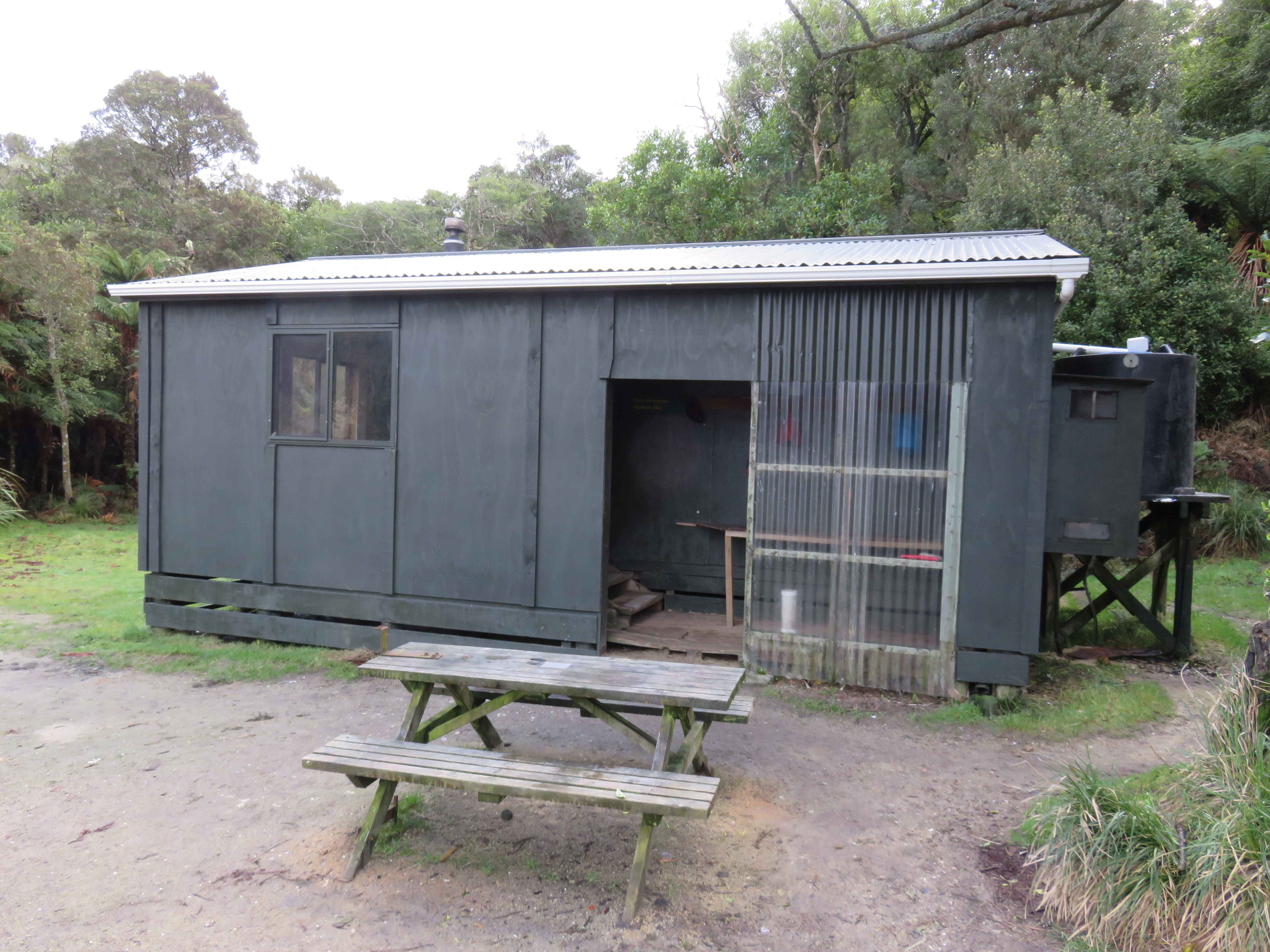 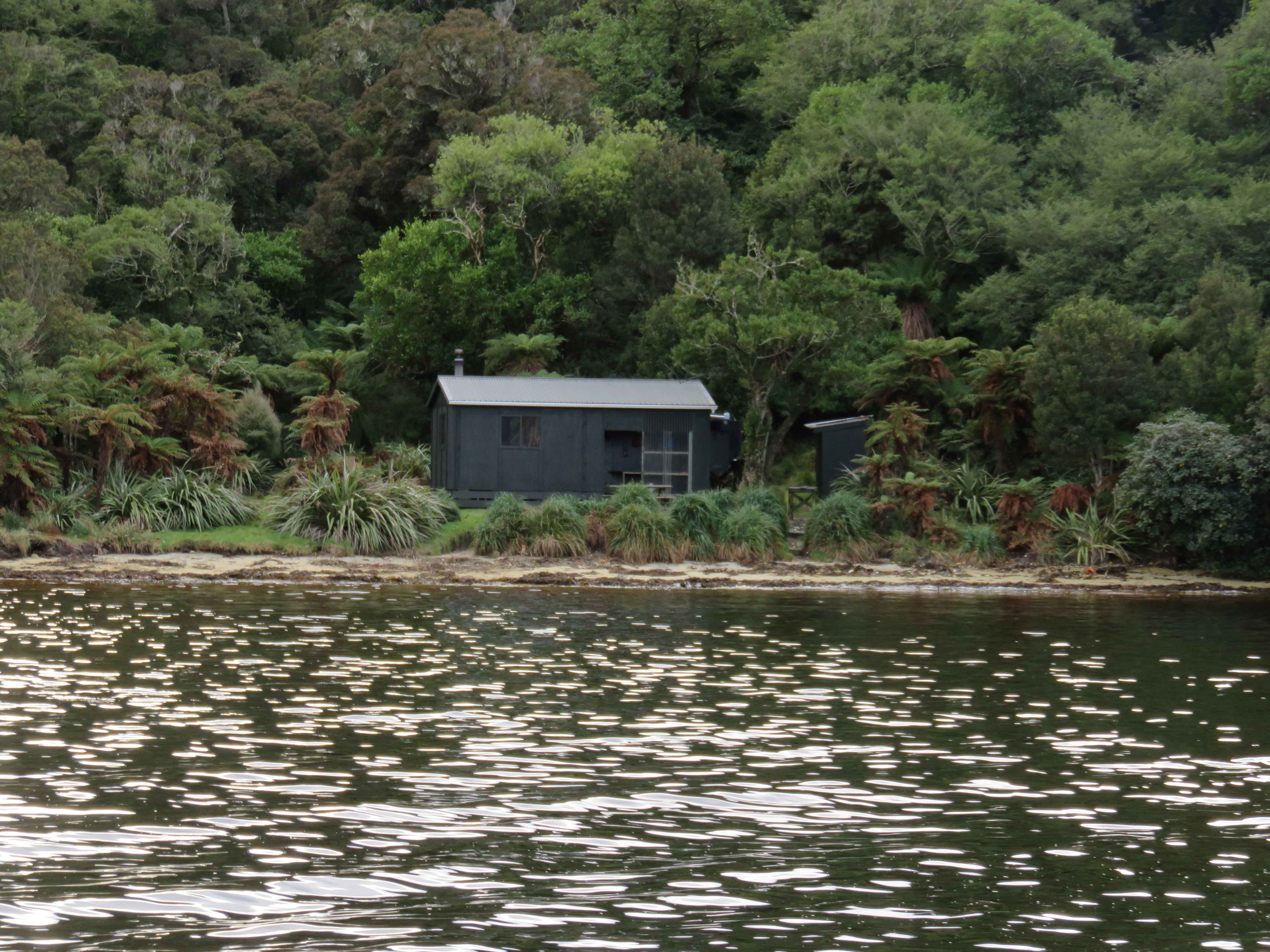 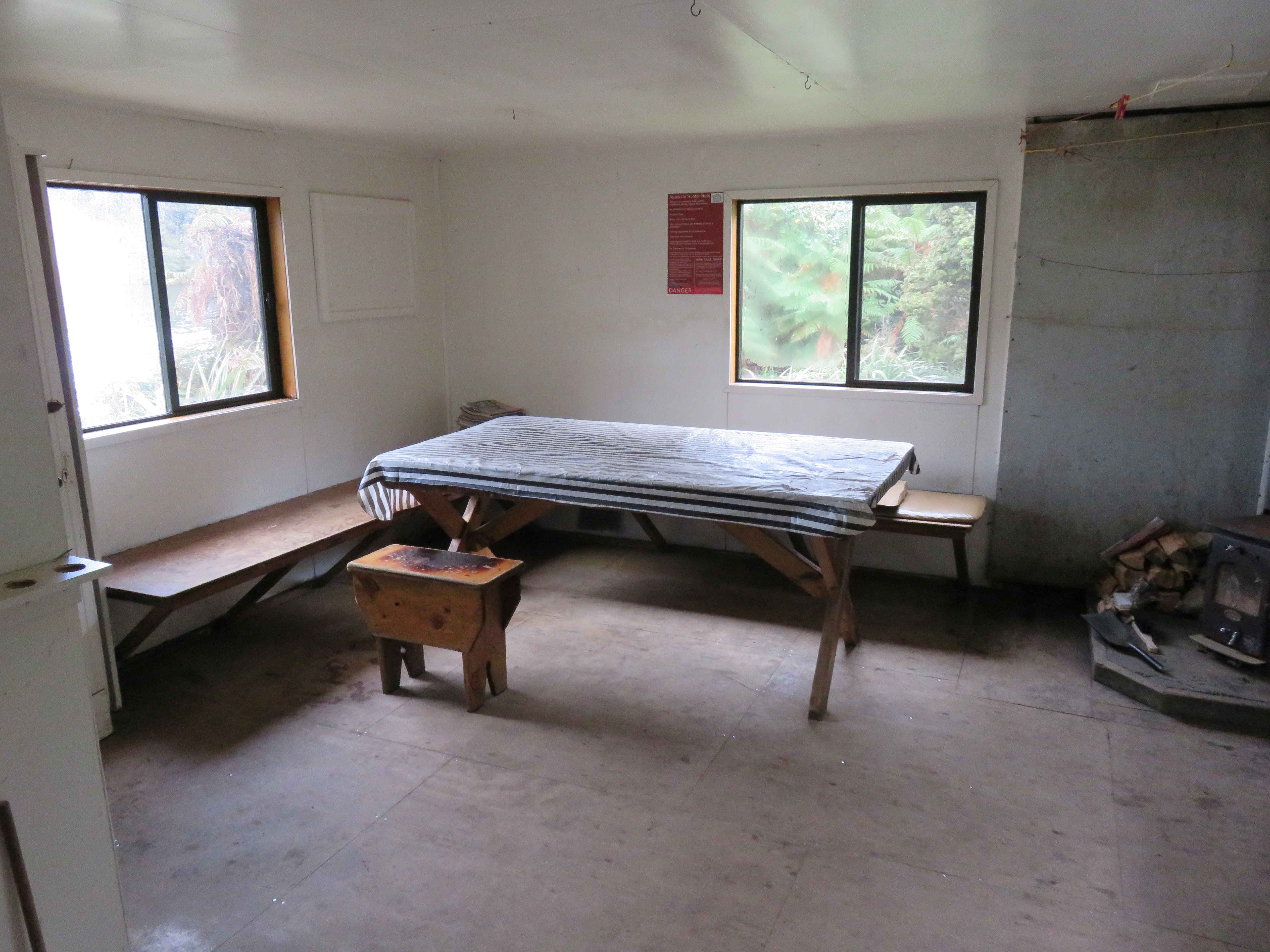 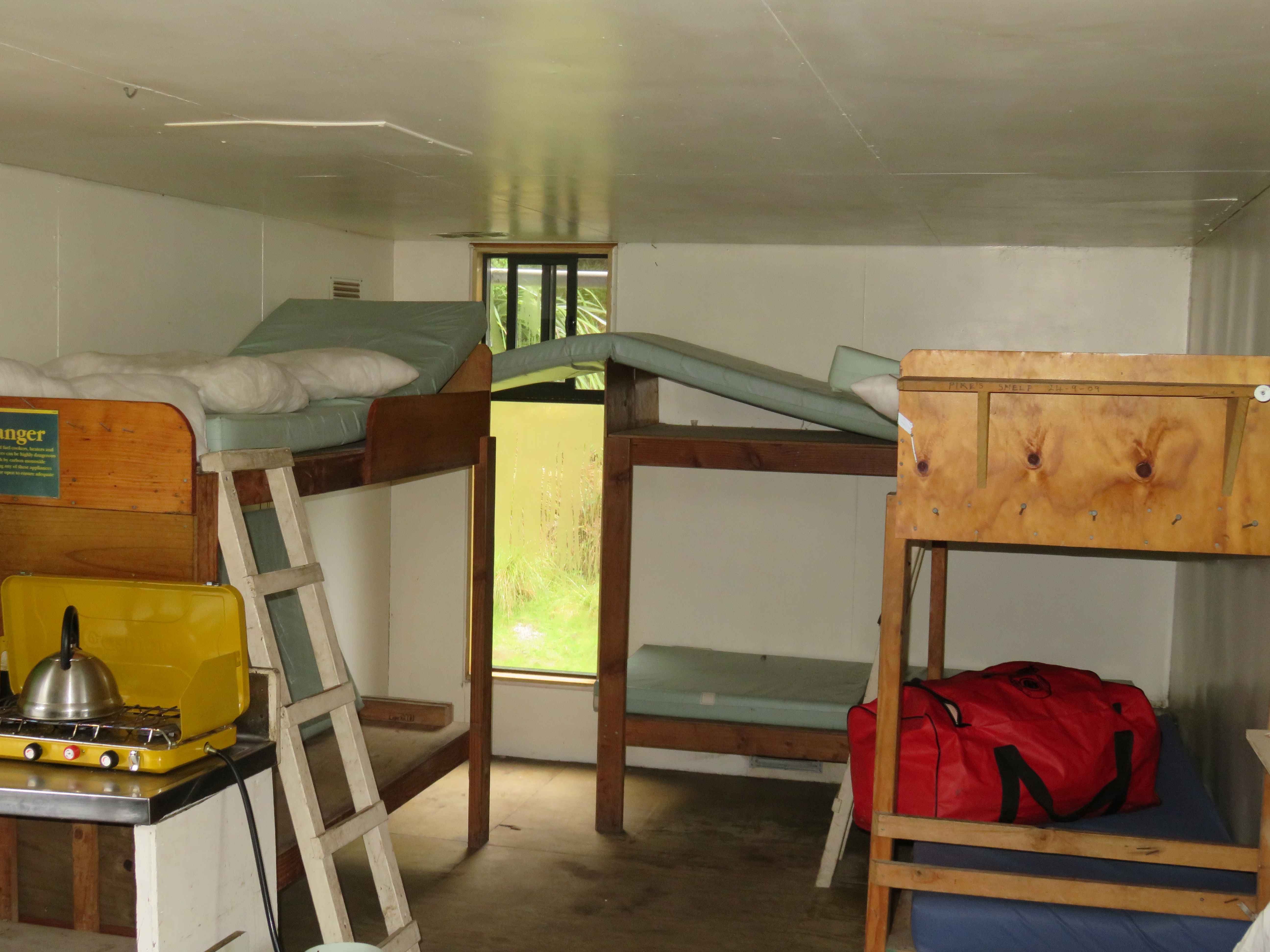 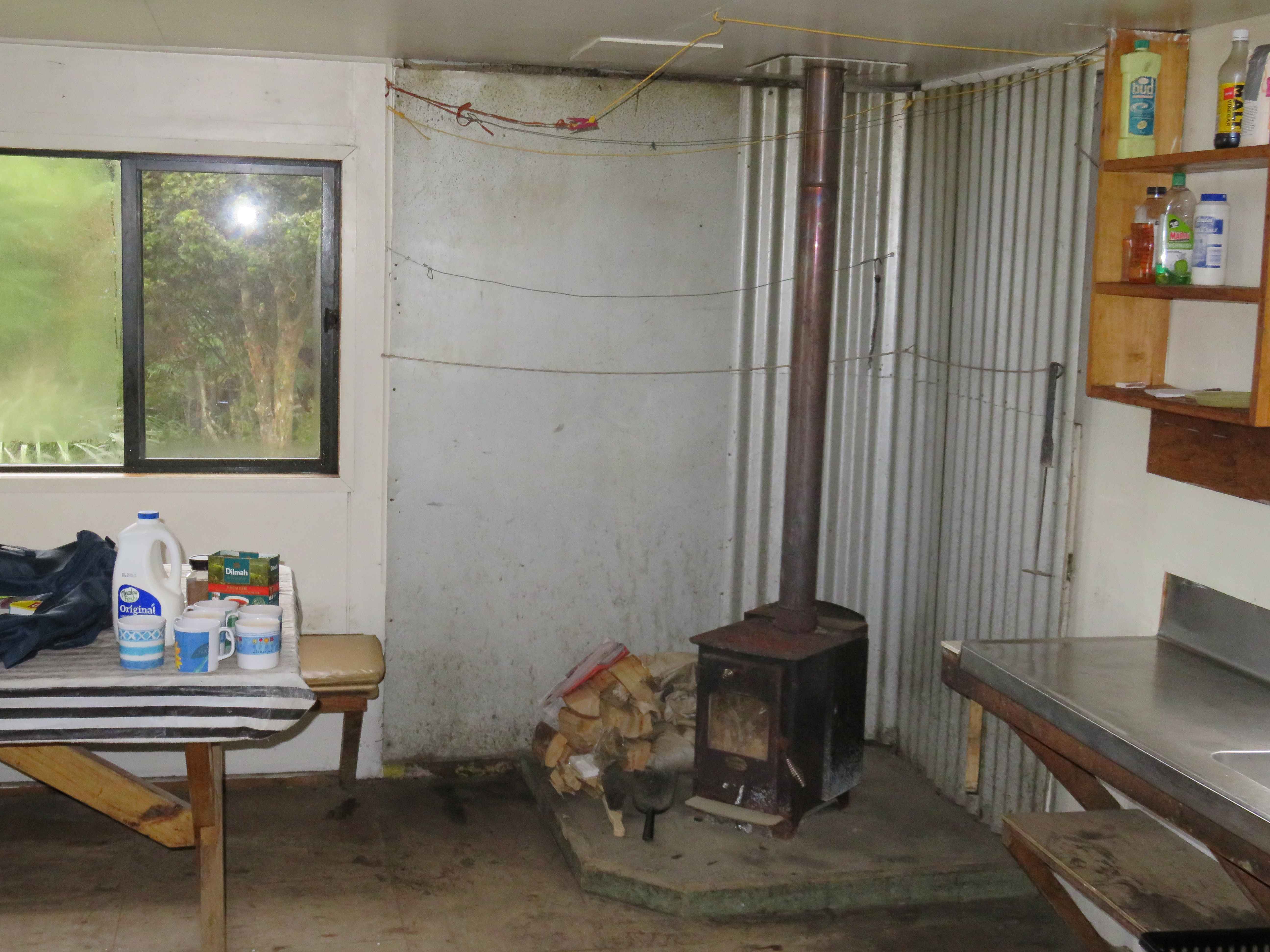 There is no cellphone reception at the hut.

The block takes it's name from from the bay named Abraham’s Bosom which is in Port Adventure. Both Abraham’s Bosom and Sarah’s Boson occur at the Auckland Isles. Early American whalers are possibly the authors of the names of those locations.